Greetings! I would like to share about my birding history...briefly I hope. I was born in Tapah, Perak and when I was 5, we shifted to Bidor, since my dad got a job there. We lived in a quarters of a saw mill located at Jalan Tapah, Bidor. The area surrounded by abandoned wooded land, bushes and orchards. Therefore, the area is filled with birds and other wild animals. This made me to have a great interest on watching birds, but I did not now how to identify them. When I was 14, I bought a book from my school mate, on Malaysian birds published by WWF Malaysia. With the help of that book and a basic set of binoculars, I was able to identify the birds well. I started to write notes on what I observe. I even collect the bird feathers, and I did had the primary wing feather of a Great Argus Pheasant in my collection as well.

There was about 44 species of birds I had recorded at my neighborhood those days. Most were common garden birds. Others were 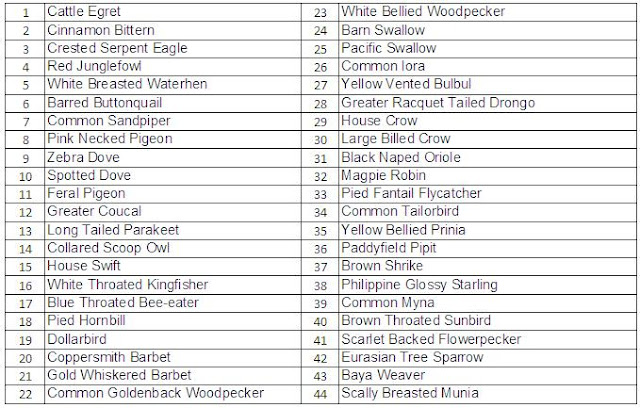 Once I shifted to Klang, some of the notes I had collected was missing and the birding activity went dormant for some years till I pick it up again. There were few things that had changed. First, some birds already been "moved" or classified under different genus. For an example the white Collared Kingfisher, which was initially classified under the genus of "Halcyon". Now it has been placed under the genus "Todiramphus". Same goes for the Spotted dove.

Another change was the introduction of the subspecies of the birds. I generally use genus and species name only as a reference, but now there are some birds are further classified to subspecies. For an example, the Purple Heron and Black Naped Oriole.

As for now I'm equipped with Nikon D5500 camera and Nikkor 70-300mm lens to "capture" the birds in action. Adding to these gears, the Bushnell 20 x 50 bino. Much to learn actually, before getting into some serious camera and lens set which are recommended for bird photography. Some top birders in Malaysia are also kindly aiding me in getting info about birding locations and identification. I take this opportunity to thank to those who helping me to venture more into this.

Posted by சரவணன் பழனிசாமி ~ Saravanan at 09:39
Email ThisBlogThis!Share to TwitterShare to FacebookShare to Pinterest