I was from Perak, from Bidor exactly. My neighborhood those days surrounded with all those birds which are now a rare sight, i.e. the White Bellied Woodpeckers., 3 to 4 of them flying towards the abandoned rubber estate every morning and leave before sun set. Once completed my internship, I had to shift to Klang, and it was totally different "habitat" for me. I had a big gap in birding here, since busy with my first job, did not have my own vehicle plus I did not know much about the places.
The worst news is, my bird notes and bird feather collection books, which I kept for more than 10 years, went missing when we shifted from Bidor to Klang. It was a great lost. Although some notes are still in my memory till now, some I cannot recall. I created a file in Ms Excel and started to put the notes that I could remember, the best I could do at that time.
Back to Taman Sentosa, my current neighborhood, is actually not that bad for birds as we still have abandoned lands and plantation around, still. I even had seen few Lesser Whistling Ducks flew from the treatment ponds and pumping stations here. Below is the list of birds so far observed in Taman Sentosa: 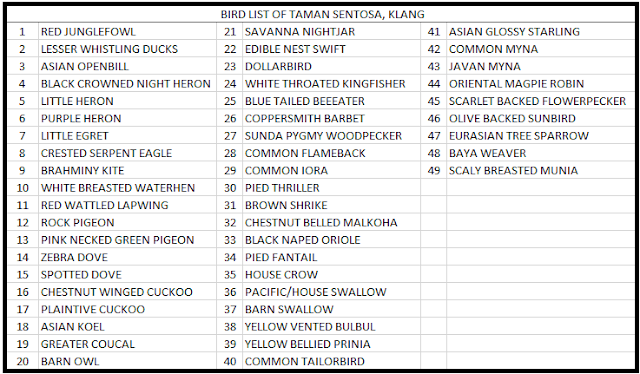 For this year, I manage to see a small group of Chestnut Winged Cuckoos in a feeding frenzy, plus a Chestnut Bellied Malkoha, which are the newly added birds in the list, for this year so far. As long as we have some green patches among the housing areas here, I can still see these birds easily. We may lose these areas for development, I do not know it may or may not. If it happens, the population and the number species existing in Taman Sentosa may drop.
Posted by சரவணன் பழனிசாமி ~ Saravanan at 22:41 No comments:
Email ThisBlogThis!Share to TwitterShare to FacebookShare to Pinterest

Well folks, after a long gap indeed, we are going to continue to discuss on the features of birds which helps to ID them. The tail! Tail is another obvious feature of a bird. You may note on the length of its tail: long, medium or short, or even its approximate ratio compared to its body length, i.e. twice the length of its body.

Most of the time, the tail is a display ornament for mating, for an example the game birds or fowls. The tail feathers are much elongated and colorful in male birds. Healthier males have much beautiful and attractive tail feathers; females' choose such males to have a healthier offspring.

Its a good highlight for gender identification for some birds, i.e. Indian Paradise Flycatcher, where males have much elongated central tail feathers while the females are short tailed. However, be very careful at some times the male may have loss their elongated tail feathers, thus it may look like a female. In such cases, we have to look into other features which may help us on the gender identification.

When it comes to flight, tail produce the lift, supplementing the lift produce by the wings. It also influences flight maneuverability and agility. The tail also act as a stabilizer when they perch. For woodpeckers, the tail works together with its feet, to adds the stability and support during their perch on vertical surfaces.

Next, the shape of the tail. Below are the examples of the tail shapes:
Another way to use tail as a feature to ID is their length compared to the wings. One such example, the Slender Billed Crow. When folded, the wings of a Slender Billed Crow are slightly longer than its tail. This feature is helpful to differentiate this crow from the Large Billed Crow, which shares similar habitat.

(Thanks to those contributed photographs and informations for this blog entry: Terence Ang, Capt Kumar, Supriya Malhotra, Ng Jung Chuan)