In the beginning of 2020, my lifer target was 20 species. Then Movement Control Order was engaged, limiting my birding activity from March to June 2020. At that moment, I upgraded my Nikkor 70-300mm manual lens to Nikkor 70-300mm DX AF lens, where I no longer need to squeeze my eyes for a good focus. I started to shoot RAW and practiced my editing works in Lightroom CC. I even made my own sunbird feeder that time, for those Olive Backed Sunbirds, which visits my hibiscus patch daily. 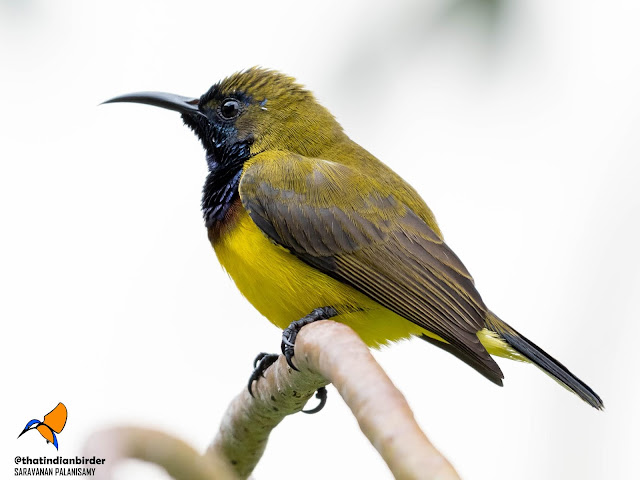 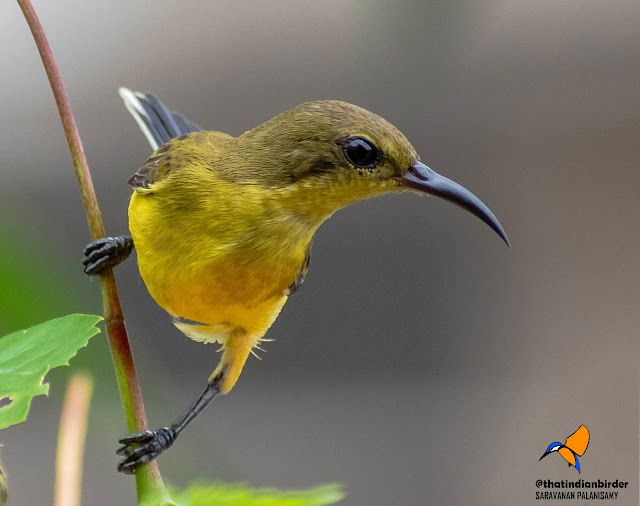 After MCO was lifted, it was a relieve since I still managed to roam around for birds, either solo or with birding friends. In Sept 2020, I managed to get my dream lens, Nikon 200-500mm AF-S ED VR lens, thanks to my wife, Tamarai, who aided me to own the lens. Thanks to her too, who tolerant enough to follow me to some birding spots.

As for the year 2020 I managed to bag 69 species including some rare ones, even first records in Malaysia. 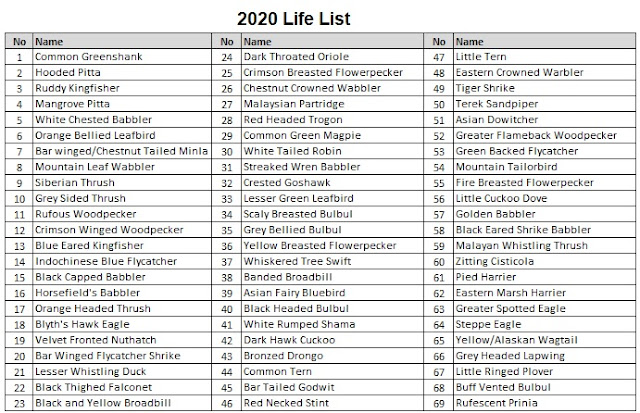 I would like to thank my friends for sharing me information on birding, birding sites and bird photography/post processing techniques:

Lets hope 2021 will be a much better year. God bless you all.

Posted by சரவணன் பழனிசாமி ~ Saravanan at 22:25 2 comments:
Email ThisBlogThis!Share to TwitterShare to FacebookShare to Pinterest

Brown shrikes are indeed the most common migratory garden varieties that we often see in Malaysia. They are very vocal, so its easy to find them out there. They are available in Malaysia from September to May; however, some have been recorded arriving late and stay longer.

Its scientific name is Lanius cristatus; “Lanius” means “butcher”, whereas “cristatus” means “crest”, which is used in a broader manner than English. Its English name derived from the word “shriek”, which indicates its call. In Tamil its called as “Pazhuppu Keechaan” (பழுப்பு கீச்சான்), where “Pazhuppu” means brown, “Keechan” means shrieking bird.

There are 4 subspecies of Brown Shrikes have been seen in Malaysia:

The nominate race, L. c. cristatus is much robust with a larger head. The bill is more hooked. Wings are much shorter and rounded compared to other races. Tail is longer, narrow, and more graduated. Adult male has brown upperpart, with rusty brown crown and rump, with a brown tail. The flanks are chestnut washed. The supercilium is white (much homogenous in thickness) and well defined. Wings are brown; tertials and wing coverts are fringed with buff. Bill is black, but the base appears paler (pinkish) during winters.

As for the female of cristatus race, looks like similar to the males, except, has dark brown eye stripe and a paler lore. It has strong crescentic on its underparts and malar area. Field observation (Nov 2020) also revealed that there were even cristatus females with less crescentic markings and looks like a male, except for their dark brown eye stripe, lack the rusty brown crown and rump. In some cases, the male and females can be distinguished by behavioral details during breeding, due to their very similar plumage.

The L. c. confusus race, is similar to the cristatus race, yet with homogenously colored upperpart. The wing primaries are much longer and it has a white patch on the base of its primaries. Adult male is similar to male cristatus, except it has a homogenous ashy brown upperpart, much distributed greyish white forehead (which is not well demarcated from its crown). The supercilium is white or greyish white much broader, especially at the region above the eyes. At times, the supercilium appears greyish, not well defined and merge with the crown.

Females are similar to males with strong crescentic barring one its underparts and malar area. Note that some females do have less barring, and has very much similar appearance as males.

The race superciliosus, L. c. superciliosus, as the name implies, is identified with its broad, uniform white supercilium and forehead. Adult male has a rich reddish-brown upperpart, with crown and rump appears much brighter. Some comes with cleaner underparts; chestnut washed flanks. Longer bill and more attenuated. Tail is redder with white tip.

As for female, upperpart is similar to males with paler lore and much brownish eye stripe. Less crescentic barring on the flanks, no barring on the malar area.

The first winter confusus is similar to L. c. cristatus, but with much rufous upperpart (especially crown and mantle). Pale forehead. Buff underpart with strong crescentic barring, and a brown tail. Juvenile females of confusus are similar to the adult females, with strong barring on the underparts and malar area.

The lucionensis race, L. c. lucionensis, is typically distinguished from other races by its greyish crown. Adult male is similar to other brown shrikes, except for supercilium and crown are greyish. Rump and upper tail coverts are chestnut; tail is brownish. Bill is black, but the base will be paler during winter. Small white patch on the base of the primaries.

Female of lucionensis is similar to male, with strong crescentic barring on underparts and malar area. Eye stripe is brown, less solid black on the lore. Pale lower mandible.

Occurs in Peninsular Malaysia, Sabah and Sarawak, between September and May. Some do overstay  since some Brown Shrikes are seen out of its wintering periods here*. [There not much known on the conservation status of the Brown Shrikes. The race superciliosus and lucionensis had declined by 80% in Hokkaido (Japan); causes were unknown. This may cause by habitat destruction (due to increase of agricultural land), pesticides and fires. Brown shrikes are not globally threatened and there is a little information available for its population level. Population is in declining trend (Birdlife Datazone) and yet classified as “Least Concern” by IUCN.

Isabelline Shrike: Isabelline Shrike lacks the white supercilium of the brown shrikes. Adult male has a black eye stripe, reddish tail and pale patch on the base of its primaries. These attributes are enough to distinguish an adult male Isabelline race from the brown shrikes on the field. Females are similar to males, with paler eye stripes (brownish instead of black) and has crescentic barring on the underparts and malar area. Females’ rump and tail are reddish brown, not as bright as the males. First winter Isabelline Shrikes are similar to the female, yet much paler and with very weak barring on the underparts.

Red Backed Shrike: Red Backed Shrikes have shorter tail and longer wings. Eight primaries are visible when its wings are closed. Adult male has grey crown, mantle and rump, with a reddish-brown back and wings. The underpart is white with a peach washed flanks. Tail is black with a thin white tip. Female shrikes similar to male but with paler plumage. Underparts are strongly barred. Upper tails are rufous and lower tail is grey. The juvenile shrikes are strongly barred than any other races, with a chestnut upperparts and paler underparts. This race has much tendency of confusion against the lucionensis race (as for the adult birds).

Since the Isabelline and Red Backed Shrikes are not been recorded in Malaysia, therefore we don't have to consider them both as a confusion species locally at the moment.

Tiger Shrike: Even if for the greyish crown and nape, which resembles a male lucionensis, the male Tiger Shrike can be distinguished by barred brown wings. Female shrikes are similar to males with much brownish and less grey on the crown and nape. Lores are whitish. Some comes with short buff eyebrows. Underparts are buff-white with strong barring on the belly and flank. Juveniles are paler with heavy barring on the brown tinged grey crown, wings, rumps, face and underparts. It lacks the eye-stripe too.

Most solitary in nature, except know to migrate with 2 to 3 birds together. Available in Malaysia between September and May. Very territorial with a small feeding territory. Calls are heard even as early as 6.30am and up to 7.30pm from their roosting point. Hunts from a vantage point, can be just a meter away from the ground or as high as 5 meters. The shrike lunges on its prey to the ground and goes back to its perch. Such lunging act may had given its Malay name as “tirjup” which could have been derived from the word “terjun”, which literally describe that lunging act. Never seen hawking or gleaning for prey. Its preys on insects, invertebrates and small vertebrates such as small frogs, lizards, even smaller birds. It has been mentioned that preys are impaled and teared before consuming. This behavior had given the shrikes another name as the “butcher bird”. It gives out a series of loud, harsh calls, which often longer in first 4 to 5 tones and gets shorter as it ends. It also gives a low volume series of chirping calls while waiting for the prey from its perch.

Breeding is much later in high altitude breeding regions. Usually between June – August. Due to lack of obvious sexual dimorphism, mate attraction seems to be on “trial and error” base, where it is possible for unmated males to court each other and other shrike (which may be the reason for the occurrence of hybrids). Males will be on flight displays and land next to its potential mate, with bills erected upwards, turning the head side to side. If its mate performs the same display, it is a male shrike. Nesting site is selected by the males, build by both male and female. The cup shaped nest is made with grass stems, mosses, small twigs, feathers and roots. Usually 4 to 6 eggs (yellowish brown with brown spots) are laid, incubated for 15days. Nestlings will fledge in 2 weeks.