Greetings friends!
Me and my best buddy, Murugesan planned a one-day birding trip to Frasers Hills on 13.07.2019. He brought with him his newly bought Sony FE 200-600mm f/5.6-6.3 OSS lens. After had our breakfast at Klang, we set off to the spot around 6:00am. We managed to reach the spot around 8:00am. On the way, we missed to shoot 5 birds, an Emerald Dove, Chestnut Backed Forktails, Cuckoo Doves, probably a flycatcher and a bulbul. A big regret since those were possibly our lifers!!!

Once we reached the spot, we parked near Puncak Inn and walked along the road. We stopped near a fig tree near to our parking area. We sighted a Fire Tufted Barbet having large figs for breakfast, followed by a Mountain Imperial Pigeon (Lifer!). We did sighted the common resident birds too; Chestnut Caped Laughing Thrush, Silver Eared Mesia and Long Tailed Sibia. Eventhough those are common species here, they are considered lifers for my buddy since he seldom ventures hill stations for birding.

We continued to walk along the road and found  a pair of Mountain Bulbul (Lifer!) busy getting ready their nest. Both male and female bird involve in the nest building process. The nest looks like a deep cup made of strips of dried plant matters and fibers, attached to a small branch.


In between I sighted something which looks like a whistling thrush, lurking silently in the bushes. I didnt manage to get a good photo as it was dark. By the look of its beak and the its tail splay...plus the pale "spots" on its chest, I can conclude that it could be a juvenile Large Niltava (Lifer!). 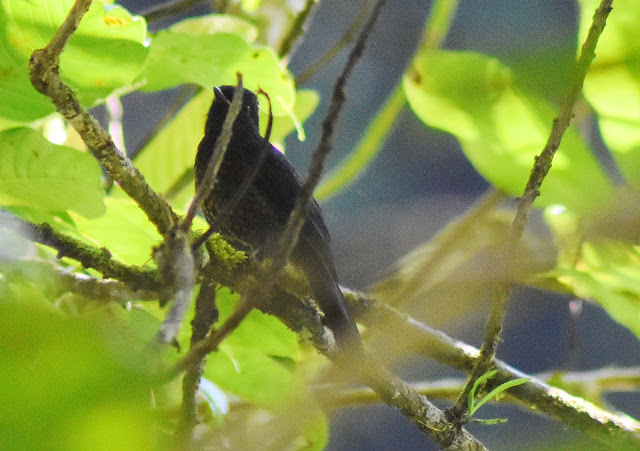 As we continue to walk, we found a small group of Mountain Fulvettas foraging for insects at the entrance of Abu Suradi Trail. The party were soon joined by a small group of Chestnut Caped Laughing Thrush.

A pair of Grey Chinned Minivets (Lifer!) and a female Greater Green Leafbird (Lifer) were seen as we proceed towards the Smoke House. Due to the distance, I'm unable to have clear shot.


Near to the Smoke House, we sighted Streaked Spiderhunters, a small party of Blue Winged Minla (Lifer!), a female Black and Crimson Oriole (Lifer).


As we walked back to our parking, we saw a pair of Himalayan Striped Squirrel busy with what I assume is their mating ritual. They were like taking turn sniffing their "rear", it was funny though.

Around 1:00pm we had our lunch and proceed towards Jeriau Falls. Along the path to the falls, we sighted Fire Tufted Barbet, a small group of Ashy Bulbuls (Lifer!) and an Ochraceous Bulbul.

I bagged 7 lifers in total. Quite a trip I might say. We went back to Klang at 3:00pm, exhausted yet satisfied. Maybe in our next trip, we may spend 2 days and a night there to get more birds.

Posted by சரவணன் பழனிசாமி ~ Saravanan at 00:27
Email ThisBlogThis!Share to TwitterShare to FacebookShare to Pinterest