Before we move on, I would like to emphasize on some special head features of birds. The features are:

Crest can be described as short, medium or long. Some birds has a very prominent crest, such as the Black Crested Bulbul, which is used to derive its name.

Crest has its function as a display ornament during courtship, showing feelings like aggression or stress (to communicate), and even as a threat display to alert its allies.

Birds also display the crest to mark its leadership among the member of the flocks and also to ward off mating competitors, territorial invaders and predators. There are two types of crests:

a. Recursive Crest: Crest that is noticeable even if its not erected (i.e. Great Myna)

b. Recumbent Crest: Crest that is not noticeable unless erected (i.e. Common Myna)

Comb is a fleshy projection on the top of the head, which present in fowls. It indicates how healthy a fowl is and helps to stay cool.

Snood is a fleshy protuberance above a bird's bill, precisely turkeys. This functions as an ornament of mating displays.

Also known as "rictal bristles", these are hair like feathers arise around the base of the bill. Its common among insect feeding birds. The function of these bristles are:

a. as a "net", helps to capture of flying prey.

Wattles are fleshy caruncles hanging from various parts of the head and neck. Its an ornament for courting potential mates in some birds species. It indicates the health level of a male bird.

Some birds has a hair like structure at the center of the breasts (Wild Turkeys) or a cluster of feathers below on its chin, which referred as beard, erected for mating displays.

Skin projections which covered with feathers, mostly noticed in owl species. Its function remains uncertain. However there are some theories mentioning that its used for finding suitable mate and to give more threatening look to predators and rivals.

Its a long projection of feather from the nape. I.e. Little Egret. 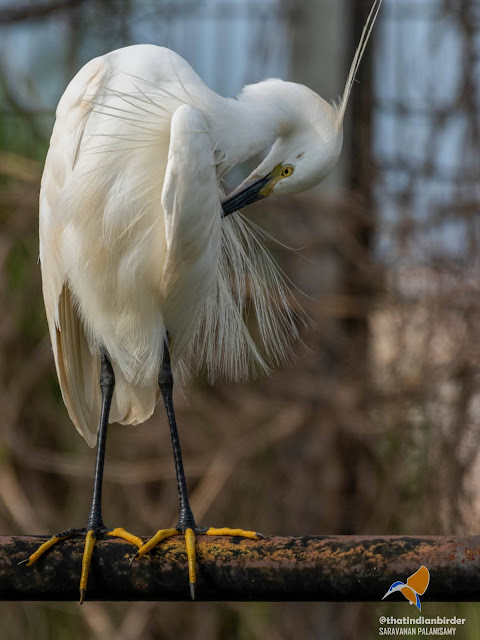 All these attributes need to  be taken note; their colors and size, it will help you to identify a bird and also to distinguish a similar looking birds, or even distinguishing the gender of the bird.

Posted by சரவணன் பழனிசாமி ~ Saravanan at 10:14
Email ThisBlogThis!Share to TwitterShare to FacebookShare to Pinterest
Location: Malaysia