It was an evening after heavy rainfall. I was out with with my gear looking for Brown Shrikes around my neighbourhood. I do noticed last year and this year, they arrived in October instead of September. I can't get a sight of them, but I could here their calls. Quite disappointed, since the lighting was good for photographing birds.

As I drove back home, I saw a movement in the bushes at an abandoned oil palm patches near my home. Something huge is moving in the bushes. It was a huge Asian Water Monitor, or locally known as "biawak". I quite look for a spot to park my car by the road side. The huge lizard is just less than 20 meters away from me. It could be at 7 foot long easily. Although I was at a safe distance from it, it's size really gave a shiver. 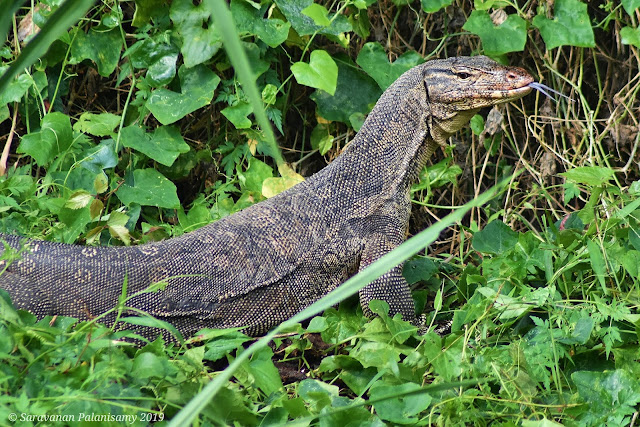 To my surprise, it was looking for something in the bushes. Baby pythons! It is actually raiding a Reticulated Python nest. I was looking at the gore scene while clicking some photos. It gulped 4 young pythons and was digging for more. It finally gulped two unhatched eggs as well. I was really shocked to see that Reticulated Pythons are breeding in this abandoned oil palm patches. Big momma python could be lurking nearby. No wonder I will hear news on pything entering houses during the rainy months. 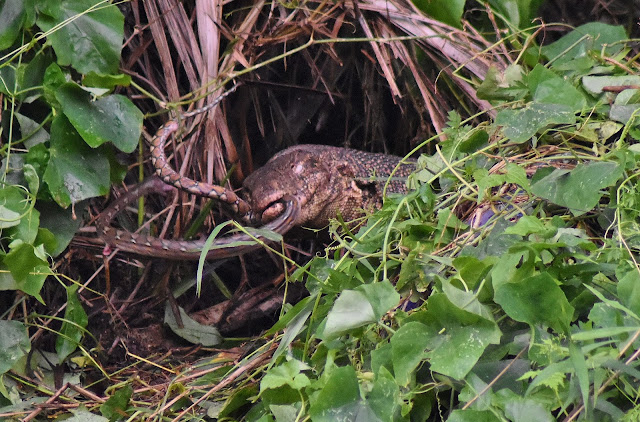 Water monitors are quite well known to me since I lived in "kampung" during my childhood. I had seen many when I go to hunt fishes for my aquarium those days. Big monitors are feared for their bites. I even had heard their bites are poisonous. My late father had bite when he was at work. He did told me that he had to take a jab since the bite is "poisonous". Well, I dont really buy that. What I know monitors do eat carrions, making their mouth is infected with a cocktail of bacteria. Once it bit a man, the bacteria from its mouth may infect the man through his wound. It later becomes septic if left untreated. Thats why monitor bites are considered "poisonous". If you read about their cousins, the Komodo dragons, only recent studies had proven that they do have venomous bite. However, skeptics aren't ready to believe that. 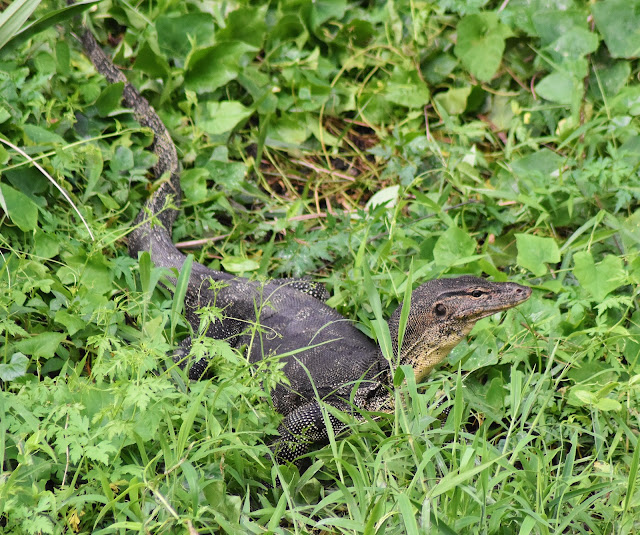 Indians here in Malaysia call the monitor as "udumbu" in Tamil, and at times as "thavaragoiyaan", a polluted form of "gabaragoiyaan", which means "monitor lizard" in Singhalese. Indians here also classify the monitors into two groups: the water monitor and the forest monitor. Water monitor refers to Varanus salvator macromaculatus, while the forest monitor refers to Bengal Monitor (Varanus bengalensis) or the Clouded Monitor (Varanus nebulosus). They can be distinguished by their habitat, coloration and the location of their nostrils.

Well back to scene. There were 3 other monitors lurked around the big guy, roughly 4 to 5 foot long. The big fella left once he had enough while the python tails dangling from its mouth.

Posted by சரவணன் பழனிசாமி ~ Saravanan at 11:00
Email ThisBlogThis!Share to TwitterShare to FacebookShare to Pinterest